(February 28, 2010)
Rainford Tennis Club have won 2009 Sports Club of the Year at the St Helens Cultural Awards.
The Club received the award in recognition of all their success over the past twelve months, which has seen them achieve Tennis Clubmark, double the club membership and significantly increase the number of juniors attending coaching and competitions. 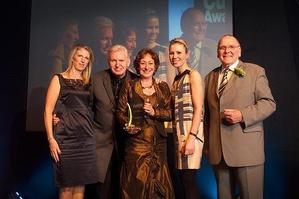 Rainford have also been extremely active in local primary and secondary schools as part of the St Helens Schools Tennis Programme, which has been funded by the Big Lottery, Schools Sports Coaching programme and the Tennis Foundation.

“We are very proud at what we have achieved over the past twelve months and we are delighted to win this award” said Club Secretary, John Case. “We are looking to keep growing even more in 2010 and to get even more people in the area playing tennis.”

Helen Bligh, Chairperson of Rainford Tennis Club, received the award on behalf of the Club at the ceremony held at the Park Inn Hotel in St Helens.