Green Army march on to another promotion 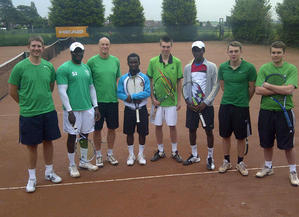 The ‘Green Army’, who are captained by Dave Hillier, didn’t lose one match on their way to promotion and will compete in Division C next season in the most competitive league in the region.

“All the players have worked so hard this season and I am delighted they will be celebrating with more silverware” said Dave.

“Our Club is getting stronger all the time and, especially with our three new courts that we will have by the end of the year, the future looks bright for tennis in Rainford.”