(June 23, 2013)
Rainford members Natalie Wall and Albert Arthur have both been in action this week at the 2013 Liverpool International Tennis Tournament.
Local player Natalie Wall, who is coached at Rainford Tennis Club by Sam Jalloh, was in the Women’s Singles at the pre-Wimbledon grass court competition in Calderstones Park and got great experience of competing against players from the top hundred of the WTA Tour rankings. 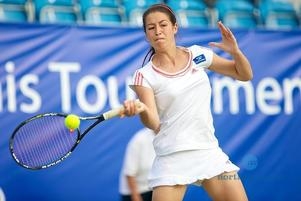 Ghana Davis Cup player, Albert Arthur, who also trains at Rainford Tennis Club also got some great experience on the grass courts against top ranked male players from across the world.“The Liverpool International Tennis Tournament has been a great experience for both Albert and Natalie" said coach, Samuel Jalloh. “It is great for a club like Rainford to have two players competing in this great international tournament on Merseyside."

There was more Rainford representation at the tournament as youngster Maisie Lavelle got the opportunity to practice on the grass courts with the professional players at Calderstones Park, which she thoroughly enjoyed.   Adam Ashton was also chosen to be a ball-boy at the tournament ahead of his appearance as ball-boy at the ATP World Tour Finals at the O2 in London in November.