Success for Rainford players at the West Cheshire Open

(August 04, 2013)
There was success for Rainford’s tennis players at this week’s 2013 West Cheshire Open with both Cameron Ashley-Jones and Erin Scott both winning trophies. 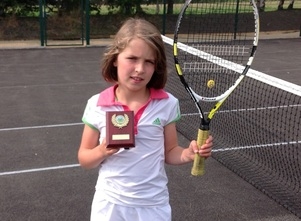 Cameron won the 12 & Under Boys Singles with a 6-3, 6-1 against second seed Ben Leeman from Cheshire in the final.  Erin Scott was also a winner in the 9 & Under Girl’s Singles, in the tournament which took place at Upton Tennis Club on the Wirral.  Erin won her final against Anna Jones in the final.