(September 28, 2013)
Rainford player Adam Ashton is celebrating after winning both the Boy’s Singles and Doubles in the 2013 Club Tournament.

The 14 year old won his singles title with a 7-5, 7-5 victory over Cameron Ashley-Jones in a high quality match at the Jubilee Recreation Ground.  Adam then teamed up with Chris Pye to win the Boy’s Doubles with an entertaining 3-6, 6-2, 10-3 win against Cameron Ashely-Jones and James Cawley. 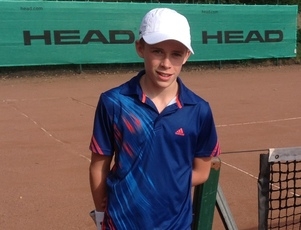 There was also a double triumph for Julie Scott who won the Women’s Doubles with Jane Harrison and then teamed up with Dave Scott to win the Mixed Doubles.Conor Porteus won two competitions winning the Men's Singles 6-4, 7-6 against last year's finalist, John Allerston.  Conor then picked up the Men's Doubles trophy with partner Simon Webster following victory over Joe Machin and Ian Spencer.

Maisie Lavelle lifted the Rod Lea Trophy after winning against Rebecca Duffy in the Girl’s Singles Final whilst Phoebe Mitchell won the 9 & Under Singles with a win over Erin Scott.

Trophies will be officially presented at the Rainford Tennis Presentation Evening, which takes place on Friday 11th October at Rainford Labour Club from 7.30pm.

View all the scores from the 2013 Club Tournament