Rainford Tennis Club’s 9 & Under Team have won their division in this season’s Lancashire Team Tennis competition. 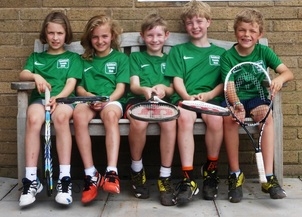 The team of Phoebe Mitchell, Erin Scott, Robert Wilkinson, Ben Moore and James Fowler won all their matches in the division and will be promoted for the 2015 season.

Under the guidance of captain Bruce Moore the young Green Army team defeated Croston, Darwen, Leyland and Holcombe Brook on their way to the title.

This was the second success for Rainford in this year’s Lancashire Team Tennis following the victory of the 8 & Under Team in the same competition in May.