Lenine and Maisie compete at Wimbledon

Two Rainford Tennis Club players have been competing on the grass courts of Wimbledon this week after reaching the finals of a national competition. 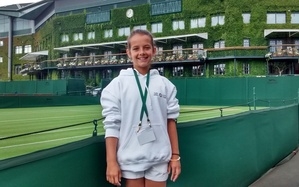 Lenine Ireme and Maisie Lavelle earned their place at the prestigious venue after winning the Lancashire County Finals of the HSBC Road to Wimbledon and have spent the last week playing matches at SW19.

Both players throughly enjoyed the experience and played some fantastic tennis at Wimbledon cheered on by their family and friends.  Maisie won all three of her group stage matches against older, more experienced players to earn her place in the main draw.  Lenine won two of his group stage matches to make it through to the knock-out stages.  It was on the fourth day of the competition that their Wimbledon dream ended as both players lost out to seeded players in the main draw.

"This has been such a positive experience for both Maisie and Lenine" said Steve Vincent from Rainford Tennis Club. "They really enjoyed their Wimbledon experience and spending time at the All England Club.  They can now use this to motivate them further and help them improve their games even more."