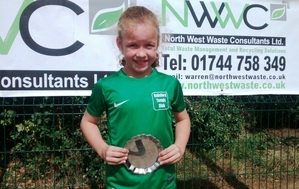 Seven year old, Eve won all her matches in the competition and was crowned 8 & Under Champion with the trophy presented by Warren Aspinall from North West Waste Consultants.

"We would like to congratulate Eve on her win in the St Helens Tennis Tournament" said Club Secretary, John Case. "We are delighted to have so many young players who are members of Rainford Tennis Club enjoying success in competitions across the country and Eve played some great tennis to win this competition at her home venue."